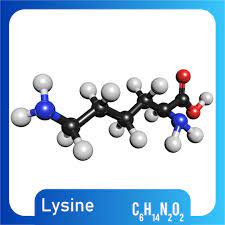 Historically, concentrated horse feeds were referred to by two numbers; protein and fat.  This feed is a “12-6” and that feed is a “14-3”.  These numbers represent the percentages of weight for protein and fat as minimum values of the guaranteed analysis on the feed tag.

These are very important values when choosing a feed for your horse.  I would also add fiber as a good selection criteria but that is a subject for another post.

One value on the GA that is so important that it is usually at the top of the GA right after “protein” is “lysine”. Yet Lysine value is almost always overlooked.  The lysine value is typically ignored because people don’t know what it is. Also, the value is so small that any difference is assumed to be insignificant.

Let’s clear that up here because we should be concerned about Lysine when feeding our horses.

This is an oversimplification disclaimer for all of the organic chemists and biologists who may read this piece.  The following explanation is oversimplified!

Lysine is an amino acid.  Amino acids are specialized proteins that are generally referred to as “the building blocks of life”.  They are protein molecules that arrange other proteins for specific assignments.  Which protein goes to hooves, muscle fiber, bone, etc. is decided by amino acids.

How Much Lysine Does a Horse Require?

According to the 2007 National Research Council nutrient requirements for horses an 1,100 pound horse in light work requires 30 g of lysine daily.  Moving to heavy work that requirement increases to 37 g.  It doesn’t sound like much but Lysine is not plentiful in forage.

Twenty pounds of orchard grass hay will only yield 27 g of Lysine which is below the minimum requirement of Lysine.  So for everyone stuck in the hay only universe you are cheating your horse.

Many horses in heavy training and on the road for shows do not get 20 pounds of hay daily.  Certainly horses on the two/three flake feeding schedule are not getting nearly enough hay to come close to daily Lysine requirements.

High quality soybean meal when properly processed is the best source of natural Lysine making it a key component in commercial feeds.

The Importance of Lysine Value on the Feed Tag

We can now understand the value of supplemental Lysine in a horse’s diet.  Commercial feeds can be a great source for Lysine if you know what to look for.

Here is an experiment you can try for yourself.  Next time you are at the feed store compare the Lysine value on the feed tag to the price of the feed.  There is a direct correlation between the amount of Lysine in the feed and the cost of the feed.  The reason is simple: high quality amino acids are expensive.

Many value feed companies as well as local and regional mills will frequently compare their feed to more costly national feed using protein and fat.  “Our 12-8 horse is exactly the same as Purina Healthy Edge and it’s $6 a bag less.”  Look at the Lysine value.  The one large local mill near me used to use this line all the time.  Purina Healthy Edge shows .9% Lysine while the mill was .4%.  On a side note I had this feed tested and the analysis came back showing that the feed had nothing in common with Purina Healthy Edge other than you would feed both to a horse.

If we keep Healthy Edge as an example and by doing some quick math conversions we will find that feeding 4 pounds per day of Healthy Edge yields 16.3 g of Lysine.  Remember that Healthy Edge is a concentrated feed to be used in addition to quality forage.  A horse getting 15 pounds of orchard grass hay receives 21 g of Lysine which will be more than enough for a horse in no work but barely enough for a horse in heavy work.  Of course a horse in heavy work would probably require more feed to maintain weight or we could change to a feed with more Lysine fortification like Ultium.

It Has to be the Correct Lysine!

Not all Lysine is created equally so it is important to not only check the Lysine level on the tag but also look at the ingredients and look for L-Lysine.  L-Lysine is naturally occurring Lysine and is the only bioavailable version of Lysine for horses.

If you see “D-Lysine” or just “Lysine” on the ingredients it is the lab grown variety and won’t do anything for your horse.

Amino acids play a huge role in how a feed formulation works and many feed companies will bank on the assumption that you aren’t aware of the finer details. 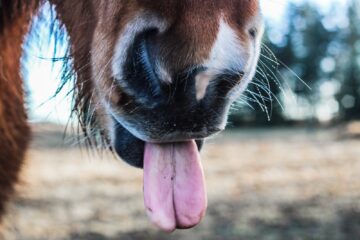 The following information is provided to horse owners making decisions for feeding their horses. The horse feed industry is worth an estimated $9 billion in annual revenue and there are many companies attempting to tap Read more… 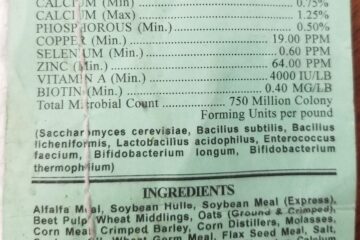 This will be a “part deux” to the “Feed Tag Bingo” post. We’ll be looking at an actual feed tag and pointing out the games feed producers play with feed tags. The tag in question Read more… 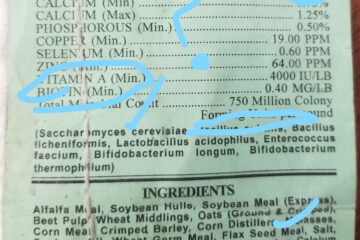 There are currently hundreds of commercial horse feed formulations offered by just the major feed companies.  If we include the smaller companies and local mills the number increases into the thousands. Owners use different criteria Read more…